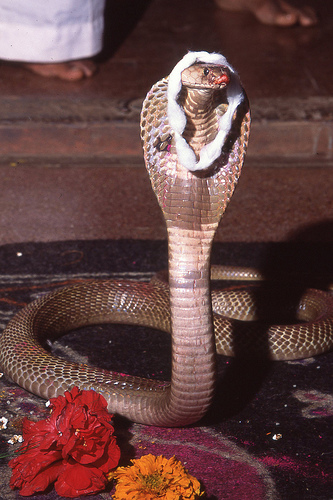 As per Varaha purana, it is clearly mentioned that on Nagapanchami day, those who are doing Naaga pooja would be worshipping the shesha, vasuki antaryaami sankarshaNaroopa of Srihari

Lord Vishnu rests on Adi Sesha, the thousand-headed serpent. Some of the avatara of Adi Sesha, who is always with the Lord, are Lakshmana, Balarama.

Then go to an ant hill (hutta), and do the abhisheka (tani ereyuvudu) with the Srihari abhishekita milk, ghee, sugar. Otherwise, if there is the vigraha of sheshadevaru in the house, do abhisheka to that idol with the chanting of the mantra - naagaraajaaya nama: | naagaraajaaMtarga saMkarShaNaaya nama: | vayana daana

Tweet
Published in Festivals
Tagged under
More in this category: « Sri Ram Navami Vara Mahalakshmi Festival »
back to top