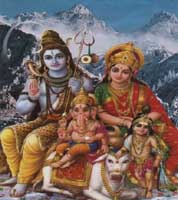 The important legend associated with Gowri Habba is that of the birth of Ganesha. It is believed that Ganesha was created by Goddess Parvati from her own body. She asked her son to guard the doors of the house and went to take bath. Shiva appeared there and was stopped by the boy. Shiva did not recognize the boy and after few heated arugements and Shiva in a fit of anger chopped off the head of the boy. Soon Goddess Parvati arrived at the scene and demanded that her son be brought back to life. Shiva brought Ganesha back to life by placing the head of an elephant instead of the human head. Gowri Habba celeberates the power of Goddess Gouri.

In another legend, importance of Swarna Gowri Vratam was narrated to Lord Muruga by Lord Shiva. Parvati wanted to marry Lord Shiva but Shiva was in no mood to reciprocate her love as he was mourning the death of Sati. Parvati was determined to win the love of Lord Shiva. So, she started intense austerities in a forest, surviving on grass and fruits. Parvati continued this intense ‘tapas’ for long sixteen years. Finally, Lord Shiva was moved by Parvati’s intense devotion and love and married her.

According to Puranas, Gowri Vratam will bestow wealth and worldly well being to the people who observe it. Legend has it that the ‘Vrata’ is so powerful that even a dry tree will turn green after its observance.

It is believed that unmarried women performing Swarna Gauri Vratam will get good husbands and married women will have a peaceful and happy married life.

Tweet
Published in Vratham
Tagged under
More in this category: « Sankashtahara Ganapathi
back to top