According to a legend, Parvati performed tapas, prayed and meditated on this day to ward off any evil that might befall her husband on the moonless night. Since then, Mahashivaratri is believed to be an auspicious occasion for women to pray for the well-being of their husbands and sons. An unmarried woman prays for a husband like Shiva, who is considered to be the ideal husband.Another legend of the day is that Shiva and Shakti married each other. 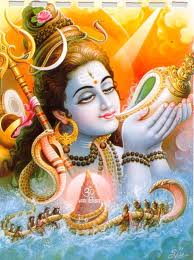 There is one more legend of shivratri associated with Samudra Manthan, a battle between devas and asuras during which a pot of poison came out of the ocean and on the request of gods, Lord Shiva drank the poison. The poison was so potent that it changed the color of His neck to blue. For this reason, Lord Shiva is also called Neelkanth.

There are numerous interesting legends associated with Maha Shivaratri festival.

According to Rudra Tandava, it was on the Shivaratri night Lord Shiva performed the ‘Tandava Nrithya’ – the cosmic dance of primeval creation, preservation and destruction.

Another popular legend is that, Shivrathri marks the divine wedding day of Parvathi Devi and Lord Shiva.

According to Linga Purana, Lord Shiva manifested himself as the 12 Jyotirlingas (lingams of light) on Shivaratri Day.

Maha Shivaratri is also associated with Samudra Manthan (the Churning of the Ocean), and this is one of the most popular legends associated with Sivaratri. Devas (Gods) and Asuras (Demons) churned the Ocean of Milk to get Amrit or Amrita (the nectar of immortality). While performing the Samudra Manthanam, a pot of highly toxic poison (Kalakuta or Halahal) came out of the ocean. Devas and Asuras were terrified seeing the poison as it was so toxic to destroy all creation. Lord Vishnu advised the Devas and Asuras to pray and seek help of Lord Shiva. Out of compassion for living beings, and leased with the prayers of devas and asuras, Lord Shiva drank the poison. Goddess Parvati was terrified seeing this and stopped the poison in Lord Shiva’s throat with her hands. The poison was so toxic that Shiva’s throat turned blue. Thus the name Neelakantha, which literally means “One who has Blue Throat”. Devas and Asuras started praying the whole night and Lord Shiva was pleased with their devotion and said whoever worships me on Shivaratri day will get all their wishes fulfilled.

Another version relates that the whole world was facing destruction and Goddess Parvati worshipped her husband Shiva to save it. She prayed for the jivas (living souls) remaining in se – like particles of gold dust in a lump of wax - during the long period of pralaya (deluge) night, that they should, upon becoming active again, have His blessings, but only if they worshipped Him just as she did. Her prayer was granted. Parvati named the night for the worship of Ishwara by mortals Maha-Sivaratri, or the great night of Shiva, since Pralaya is brought about by Him.

After creation was complete, Parvati asked Lord Shiva which devotees and rituals pleased him the most. The Lord replied that the 13th night of the new moon, during the month of Maagha, is his most favourite day. Parvati repeated these words to her friends, from whom the word spread over all creation.

Tweet
Published in Festivals
Tagged under
More in this category: « Saraswati Pooja, Vasant Panchami The New year festival or Ugadi »
back to top