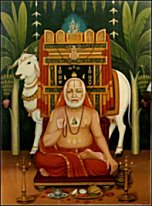 Raghavendra was born as Venkanna Bhattain the town of Bhuvanagiri in Tamil Nadu to Kannada Brahmin parents, Thimanna Bhatta and Gopikamba, in 1595, 1598 or 1601. He was also known as Venkatanatha or Venkatacharya in honor of Venkateswara.


Ragavendra Swami was advocated Vaishnavism and the Dvita Philosophy advocated by Madhvacharya. He is considered by his devotees to be a re-embodiment of Prahlada, the devotee who was saved by Vishnu in his avatar as Narasimha. Shri Raghavendra Swami has performed many miracles during his lifetime and is believed to continue to bless his devotees to this day. Dosham will be alleiviated.

The name Raghavendra is a very appropriate choice for Rayaru, chosen by Moola Rama Devaru (Lord Rama). It carries a wealth of meaning. It indicates Lord Rama since he is the Indra of the Raghu kula. It also means ‘one who destroys sins and bestows desired things’. Sri Raghavendra Tiirta started his services by teaching all the works of Sri Madhvacharya to his disciples. He propagated right knowledge and vanquished several opponents. Apart from imparting knowledge and guiding his disciples, he composed works for the benefit of future generations.

Timmanna Bhatta a Vedic scholar and a student of the pontifical head- Surendra Theertha, the learned man and a great Guru. Lord Sri Venkatesh at Tirupathi happened to be their family deity.  In 1595 AD Gopikamba gave birth to a divine son, who was to become the future Guru Raghavendra. Baby's father thimmannacharya's joy was of no bounds. He offered thanks to God. He named the boy "Venkathanatha (Venkanna)" in gratitude to Lord Venketeshwara by whose blessings; this brilliant child had been born to him.

Thimmana Bhatta was lucky man. He had a devoted wife, daughter, cultured son-in-law and two sons one is the incarnation of the great Prahalad. Thimmana Bhatta, got his son (Gururaj) married and he along with his wife and Venkathanatha accepted the invitation of Sri Sudhendra Theertha to stay in the matt. Sri Sudhendra Theertha was pleased with the sincere devotion and cleverness of Venkanna. He said to himself that he is going to be great person in life and congratulated Thimmana for having gifted with such a son.

Days rolled on, Venkathanatha grew up and went to live with Guru Sudheendra theertha at Kumbakonam. Venkanna had finished the study of Amara Kosha. Venkathanatha daily gave himself to constant meditation of god. His behavior had also changed. He also wished to perform the worship of god with all the paraphernalia as the swami did in the matt and he was devoted to Mula Rama (The Moola Rama and Sita idols where believed to be of the incarnation of Lakshmi and Vishnu due to meditation of Bramha. These idols where latter worshipped many sages and also worshiped by Hanuman, Bhimasena and also Madhava). He came to know the story of Madhava and believed in the uncommon efficacy of the idol.

Venkathanatha was married to Saraswathi Bai. For some time, Venkanna was happy living in the village with his wife, but found himself in a financial stringency at a latter stage in life. Venkanna after his marriage had two-fold anxiety. He has to pull on and also take care of his beloved wife. He had an ambition to become an extraordinary learned man quite well versed in Vedas and was very eager to popularize the teachings of Madhava. He keenly meditated himself on god but was mercilessly nipped by the killing cares and worries of life of poverty. Days and months rolled on. He thought of going to his brother-in-law's house, but found his wife to be a heavy burden and therefore left the idea.

Saraswathi Bai was a beloved wife of Venkanna Bhatta and was totally devoted to him and knew his likes and dislikes. She thanked god of giving her such a wonderful husband and she had all eyes to see the needs of her husband and cater to them. Both of them were highly sensitive. Venkathanatha was suffering from the painful poverty and Saraswathi soon conceived and gave birth to a child and the child was called Lakshminarayana. Poverty life continued and baby boy starved too.

Saraswathi got an idea, she told him to meet his Guru and take his refuge. They went to Kumbakonam. Venkathanatha and his family were welcomed in the mutt at Kumbakonam. Venkathanatha mastered all lessons at the Mutt. Swamiji took him to the debates against Adwaita school of philosophy at various King's courts (Chola, Pandian etc.). Venkathanatha began to write commentary in all three Vedas following Acharya's Rig Bhasaya, which was his ambition. But the circumstances did not favor his fulfillment. Venkathanatha was the apple of Shri Sudheendra Swami's eye. He was thought quite well worthy to succeed the Swamiji, who was waiting for an opportunity to tell his disciple of his intentions. Just by the time a disciple named Yadavendra sought the blessings of Swamiji, as he was disgusted in worldly life. Swamiji named him "Yadavendra Theerta " and he started on the religious tour.

Shri Sudheendra Swami was a genius of extraordinary and a soul of high spiritual efficacy. One day, he dreamt that Shri Mula Rama ordered that Venkathanatha alone could fit to rule the Mutt. One day he called Venkathanatha and after preliminary discussion of worldly interest, Swamiji began to reveal his intentions. Swamiji started with telling Venkathanatha that god was pleased with him and he deserves a post as the head of the Mutt. Venkathanatha could not understand the intentions of Swamiji and requested Swamiji to be clear of his intentions. Swamiji began to explain that there are many boats to ferry us across the ocean. But to all these our blessings are the sails which move the boats with great force and speed. Now why tarry on the shore? What fear is there to cross the Ocean? Venkathanatha could not understand. Shree Sudheendra Theertha knew that Venkathanatha loved his wife. When he explained clearly of his intentions, Venkathanatha expressed his inability and for renunciation, detachment was essential. So Venkathanatha explained about his wife, son and his shoulders were still young to take up the administration and responsibility of the mutt. So he was not inclined to take holy orders and take up Sanyasa. But was ready to submit himself to the mutt and Swamiji.

Time came now for Venkathanatha to succeed his Guru as the next Swamiji of the Mutt.  Venkathanatha had a blessing of Sharada Devi, the goddess of Learning and that led him to realization of self and he narrated his experience of Sharada Devi to Swamiji and decided to do Upanayana to his son and accept sanyasa. He took sanyasa and Guru named him guru Raghavendra theertha. Saraswathi was shocked to hear the news and she fell into the well. She came as a ghost in front of Guru guru Raghavendra. He sprinkled holy water on the ghost and it attained Moksha by purification.

Guru guru Raghavendra was great in every respect. He was siddha Purusha (God realized person). He started performing miracles, Blind got their eyesight, Deaf could hear. As the time approached for Swamij and he was 78 years old. It was Thursday, the full moon, He announced to all his disciples that he went by the orders of Shri Hari and he decided to leave this world.

Devotees from all over the world came to see him as the news spread. On the second morning of Shravana, finished his morning religious rites and called all his devotees and said. This is our last day. Don’t’ be grieved. It is the order of Shri Hari that we should stay in this world to safeguard the interests of our faith. But we cannot stay bodily outside beyond a limit a certain limit as that would be against the rules of the present age. There fore we are going to enter Brindavana bodily. To the last be faithful and be loyal to your God and religion. May God Bless you with all the things good. Thus he advised them.

It was now mid-day. He distributed the theerta and blessed everyone. He called Venkanna Diwan and a prime devotee and gave him a parting message."Venkanna-I am going to enter the Brindavana in an yogic posture and continue to do Japa (prayer) with a Tulasi Mala (Japa Mala/Chain of Holy beads) in the hand. When I stop the prayer place the 1200 Lakshminarayana Saligramas (Holy Stones) in a bronze container and Mrutike (Holy Sand) on my head and close it with a lid and then place some sand/mud. Venkanna was also entrusted by the Guru to build his Brindavan at Manchala (now Mantralaya). Swamiji asked Venkanna to put a stone on which Lord Rama had sat during thretha yuga as the base.   Nawab Sidhi Masudh Khan of Adoni granted Manchala village to Swamiji.

In the afternoon, when the time was auspicious, Swamiji sat in a Yogic posture and started prayers. The Brahmins were reciting Vedas and Shastras. Venkanna and others were supervising the activities. All eyes shed tears of joy and grief simultaneously. As per the Swamiji instructions the stones were placed above his head as he sat in yogic posture. Thus Swamiji entered the Brindhavan bodily. As per Swamiji’s advice that very day was observed as Maha Samardhana Day. He was to live in atma form in the Brindavan for next 700 years to come. In the Year 1671 AD, Guru Raghavendra named Yogeendra as his successor and entered the Brindavan. After Swamiji entered, his disciple Appanacharya sang the praise of his Guru and seeing the Guru's Brindavan, He could not speak, the last verse of the song was completed by Guru in the Brindavan. Still Guru Raghavendra continues to bless people who think of him in their troubles and happiness.

Tweet
Published in Devotees
Tagged under
More in this category: « Purandara Dasa
back to top